Today (November 2011) I started radiation for Burt, my brain tumor. He isn’t actually going away – just being castrated so he can’t reproduce anymore and cause further problems. The treatment is considered to be 100% successful; they won’t even check me again for six months! As usual, I want to make sure I’m not missing something in all of this. God is allowing me to be in this place at this time, so I want to keep my eyes peeled! If He could come to the earth in human flesh, take on sin, and die a tortuous death just to have a relationship with us, then I know it’s not any big deal for Him to allow me to have Burt so that I can be in the place where people often need encouragement: an oncology waiting room. That’s pretty much it for deep thoughts so far. Anyway, here we go…thoughts from each day (there will be 25).

I’ve been using a Banerji Protocol of homeopathy for intercranial tumor for 2 years. (Calc Phos 3x, 2D and Ruta 6, 2D)

I had an MRI to check the status yesterday and the tumor is “obviously less enhanced.”

The radiology report says “no significant change,” but the radiation oncologist says there is a clear improvement and change. He feels it may possibly be from the rare situation where radiation from a long time ago continues to improve things later (I had radiation in 2011), but also said I should continue the homeopathy.

(He said he is unfamiliar with homeopathy, but he only knows what he knows and that he is aware that lots of other things work.)

Anyway, I consider this a win and I’ll be continuing my protocol. I have another scan in two more years and then I’ll be released altogether.

Pictured here is my scan from 2015 and then yesterday’s from 2018. The tumor is the white stuff surrounding the black line (which is my optic nerve).

I looked up “less enhanced” in this context and essentially it looks like enhancement is how much contrast tumor tissue picks up. And if there’s no tumor, it can’t pick up the contrast. Hence…less enhancement.

So I praise God and thank Him for moving me along – it seems with homeopathy, but I am thankful for whatever vehicle He uses. 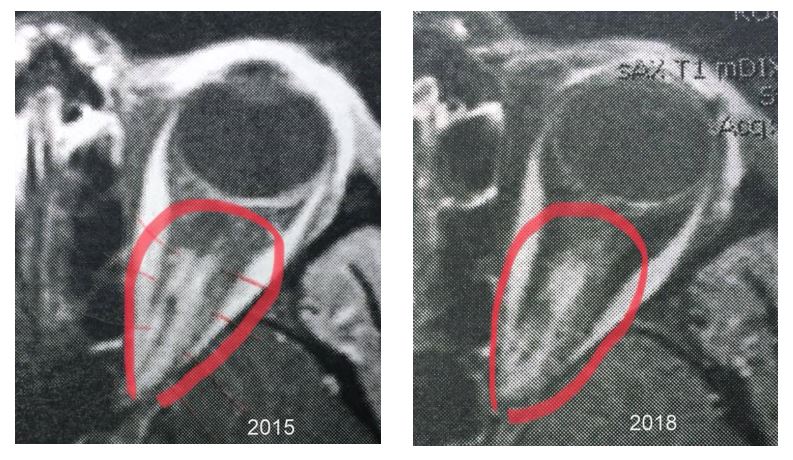