The King and I

Posted on March 21, 2012 by beyondthisdesertPosted in Uncategorized 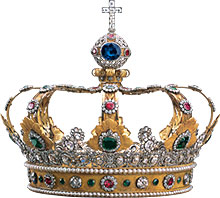 I?ve found myself quite temperamental lately. And this isn?t really normal for me; I?m usually pretty laid back. At first, I thought it was hormones (not that that?s any excuse), but the month has come and gone and I just got worse.

My favorite Facebook group has rejected some of my specific support and my heartbreak quickly turned to judgment. My students have been defiant and rebellious, and besides being pissed, I haven?t cared about their hearts. Nam and I have bickered, and I?ve had no remorse. I?ve dreaded anything and anybody that needs my attention and not on my terms or in the precise manner which I want.

After three consecutive classes of awfulness today and thinking how much I hate teenagers (not really), I remembered something I read in a devotional or a song or a blog or somewhere: look for Jesus in their faces. Whoa. That?d make a difference, wouldn?t it So, my last class came in and I did. I looked for Jesus in them and uhoh He was there! (By the way, fourth period was excellent. Big shocker.)

I came home pensive and retreated to my favorite spot for thinking. Lying on my little footbridge over my creek, I inspected my garden. It was so peaceful refreshed by the long, torrential storm. This morning when I drove to work in that storm, I remember thinking what a great analogy it was: the storm was horrible but I was safe and protected and not worried for myself at all inside my vehicle with my slicker and galoshes. I thought I should even write some blog entry about how people who don?t understand the peace we?ve had in losing our sons would understand if I explained it that way: it is a terrific storm, yes, but clothed in the Lord?s hand was safety, joy, and the absolute knowledge that we were taken care of. Now, it?s after the storm for me my sons died almost a year and a half ago, my brain tumor is castrated. So, where is my refreshment and peace from my storm Why am I so bent out of shape?

First, I needed to get right with God. I started at the beginning: confession. I poured my heart out and wept and told the Lord how sorry I was that I was so sinful. I thanked Him for His unending forgiveness and asked Him to change me. (by the way, asking God to change me is always a scary proposition because I know He will. And I get scared that He?ll change me through huge tragedies like a parent, children, or my husband dying. I think that fear is probably from Satan, but it?s there?)

I prayed the words of Psalm 51 and even got a little excited for Zion coming I?ll definitely be rid of my sin then!

Feeling more at peace, I dove into where I left off in 2 Chronicles. Funny enough, I started right where King Uzziah enters. What a great king did lots of things for the nation and ?followed all the ways of the Lord during the days of Zechariah. Huh ?What about after Zechariah The chapter goes on to describe all the feats Uzziah conquers and speaks very highly of him. The Bible even says the king was greatly helped?until he became too powerful. Not that there?s a limit on power God?s the one who gave it to Uzziah after all. Verse 16 brings clarification: ?But after Uzziah became powerful, his pride led to his downfall. He was unfaithful to the LORD his God?

King Uzziah even goes so far as to enter the temple and try to offer incense on the alter himself. Usurping the priest?s authority and defying the given laws of the Lord, well…that is a really really big deal. And it made me think?am I trying to do something that?s not my God-given role?

Look at that, will ya All of those roles I was trying to do were born out of good intentions, but were then twisted just a tad but enough to perverse the whole deal. In my FB group, we do share medical info. God has called me and give me unique opportunities to share. But, I?d gone too far and been too forceful. At school, I am called by the Lord and my employer to shape and influence my students hearts. I am NOT, though, their mom who should be articulating way more depth about?forgiveness and repentance. And my poor husband. I am not his leader. I am to follow and respect him in all things not tell him how to properly serve me. ?And just like that, the Lord began the change in my heart that I?d asked Him for only moments before. I love when He does this when He uses His word to convict and reshape our hearts. Falling in love with the Lord is my first reason for wanting to always read my Bible, but the transformation God creates in me from His word is a very close second.

And I don?t want to end like King Uzziah stuck a leper by the Lord, exiled from his home, and more famous for disobedience and a pathetic death than all the ways the Lord used him. But, oh, we so easily can fall. It?s pride that seductive, magnetic stink whispering we are more than we are in areas we ought not be.

Feel you need a good soul scrubbing My Father is there with lathered hands ready to do the work for you all you have to do is jump in the tub with your whole heart. He?ll take care of the rest.

Which king will you follow King Uzziah or the King of all Kings?

3 thoughts on “The King and I”