Lodging? We would have qualified for the Ronald McDonald House since we are expecting,but they could not promise us a room until THE night before surgery.? This wascutting it too close for comfort for us so we decided to get a hotel: -pricelinewas a great way to get a deal!? We paid $70/night for the Hyatt Regency.? The room was perfect, we asked for two beds so it was nice and roomy.? We also asked for the Club access.? We said “Do you give club access to the University of Chicago patients?”? when checking in.? The hotel worker seemed confused and doubtful but ended up giving it to us anyway.? However, everyone there was so formally dressed in suits and we mostly had loungewear with us, so it was uncomfortable to visit often.? A few times hubs went and got some water bottles and a snack but there is a sign saying not to take food out of the room.

Taxi There were times that it was easy to hail a cab (such as at the airport) and others that none were to be found in front of the hotel.? We used an app on the phone to hail one a couple of times.? Bring a handful of 5 and 10 dollar bills, we just had big bills and found that the cabbies love to have their tips in cash.

Night before? You will be wiping down with the wipes that are sent to you, so make sure to bring a small pair of scissors in your bag to cut the package open?and the scissors also come in handy when you want to remove your hospital wrist bands at discharge.? the wipes made me feel sticky and itchy in the neck so I am glad I waited until right before bed and of course not too soon after shaving.

Sky lobby? Where you check in for surgery on the 7th floor, further down the hall is a cafeteria.? Hubs was able to get his bacon and egg breakfast there for under $5 and said it was delicious.? Later we heard it was the same cafeteria that patients get their food delivered from.

Here is the Sky Lobby: 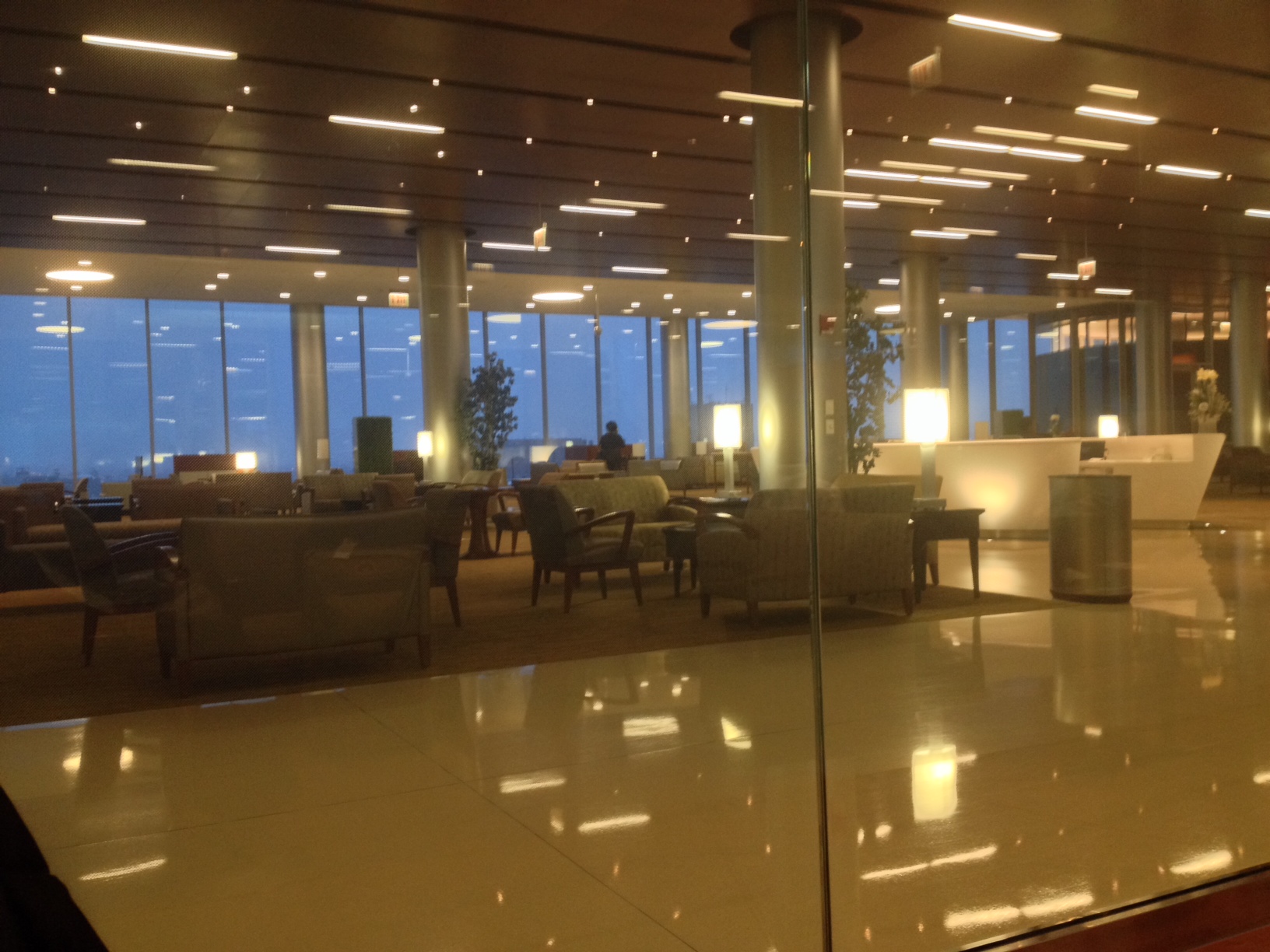 Here is the waiting area: 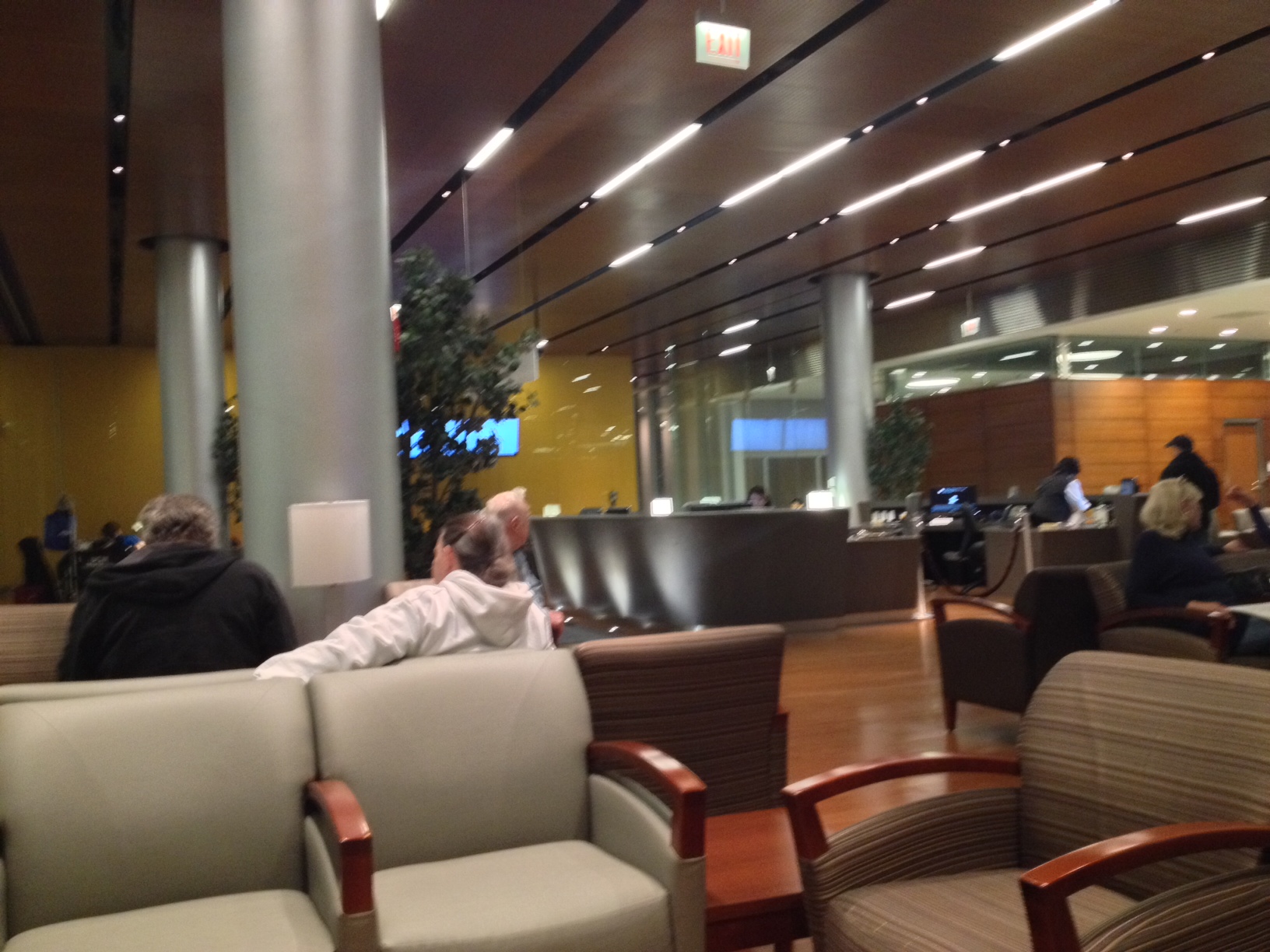 Going back? When it was time for me to head to pre-op, a lady came out and gathered those who were going to be called.? She then told everyone that they are not allowed to say “bye” to their loved one because that is too permanent, only “see you later” or similar.? Or else you had to buy her a Starbucks.? She was joking of course but being pregnant and hormonal already this kind of choked me up and I wish I had been expecting it, I didn’t really want to be in tears at that point.? Hubs was given a pager for surgery updates.

Pre-Op? In pre-op I changed into a gown, socks, and cap they provided.? Everything was nice and organized with a pregnancy test waiting, a clothing bag with my name sticker on it, and a nurse just for me.? I answered questions, and surprisingly the nurse knew nothing about a TAC.? Big hospital with lots of procedures going on.?? She started an IV and then I just waited for dh and Dr. H to show up. The general anesthesia I had was so much better than it was 20 years ago when I had my first csection.? Dr. Haney hung to on to my arm and had me laughing with his stories as they put me out? I had to breathe in the mask for a few deep breaths and then they said “here comes the good stuff!” and whatever they put in my IV worked so fast it was unbelievable.? I felt it come up my arm and then I was OUT.? There was not a sensation of anything until waking up hours later. They made it super easy.

Here is the Pre-Op Bay: 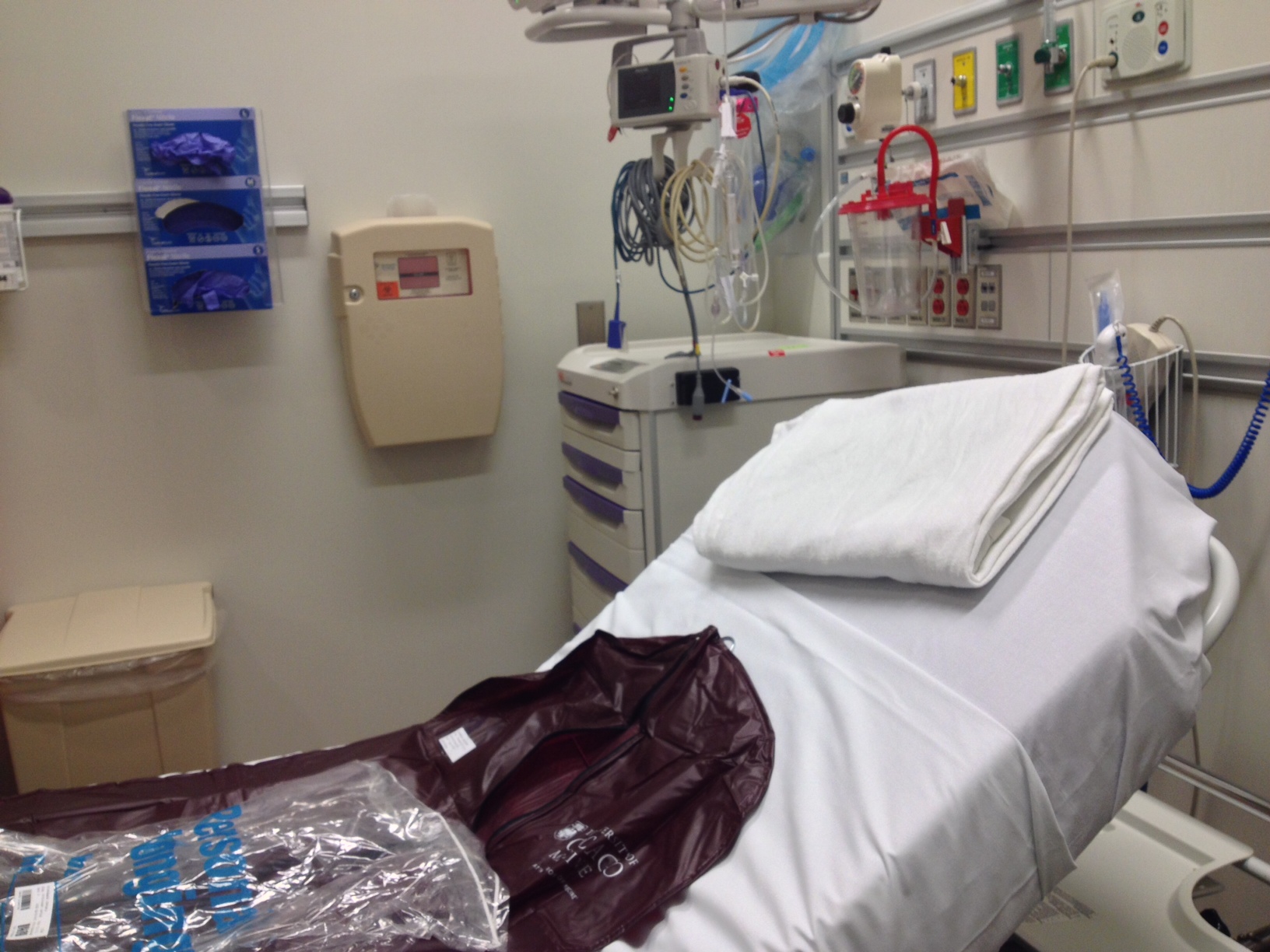 Post op I was on the Dilaudid pump and stayed laying down until the catheter was out at 4am the next day, dozing in and out of sleep.??? A few times during the night it felt like my bladder was getting full, so I paged the nurse and sure enough they had to adjust the cath tubing to get it to flow out, finally bringing relief.? I was in no condition to get out of bed before then. Once the cath was out, they took away the pain med pump.? They didn’t offer anything, I had to ask once I started feeling more pain and they started me on Percoset.? I had brought my own Gas-X but when the nurse saw it, he said that I am not allowed to have any of my own OTC meds without doctor permission.? When I asked for dr. permission later, they gave me a half of one tablet and said that it wouldn’t really help anyway.

All of my nurses post-op were gruff males.? Something I just wasn’t expecting. They mostly poked their head in now and then and didn’t seem very attentive with a high patient ratio.??? I did give the hospital all of my compliments and complaints before I even left, a patient rep came by to ask me for them and said she knew there were some snags and my feedback would make a huge difference.? I was very happy with that!

Hospital Room The hospital room in the Center for Care & Discovery was great.? Roomy with lots of storage, a foldover bed for hubs which he said was good enough and especially nice was that it was long enough for a taller guy, and even my bed was pretty comfy for a hospital bed.? I think because it is still so new.? Lots of windows and felt hotel-ish.

Ordering food in hospital room? This was disappointing because they dropped the ball on upgrading my diet allowance? day 2 and they still had me marked as “clears” and would only let me order jello, broth, popsicles stuff.? The broth was awful with a dirt taste, but that was the only thing that wasn’t good.? I had a good chef salad for lunch.? It takes about 20 minutes to get through on the ordering line, and another 45 mins for delivery, even if you just order a cup of tea!? Order early as you can if you don’t like waiting! 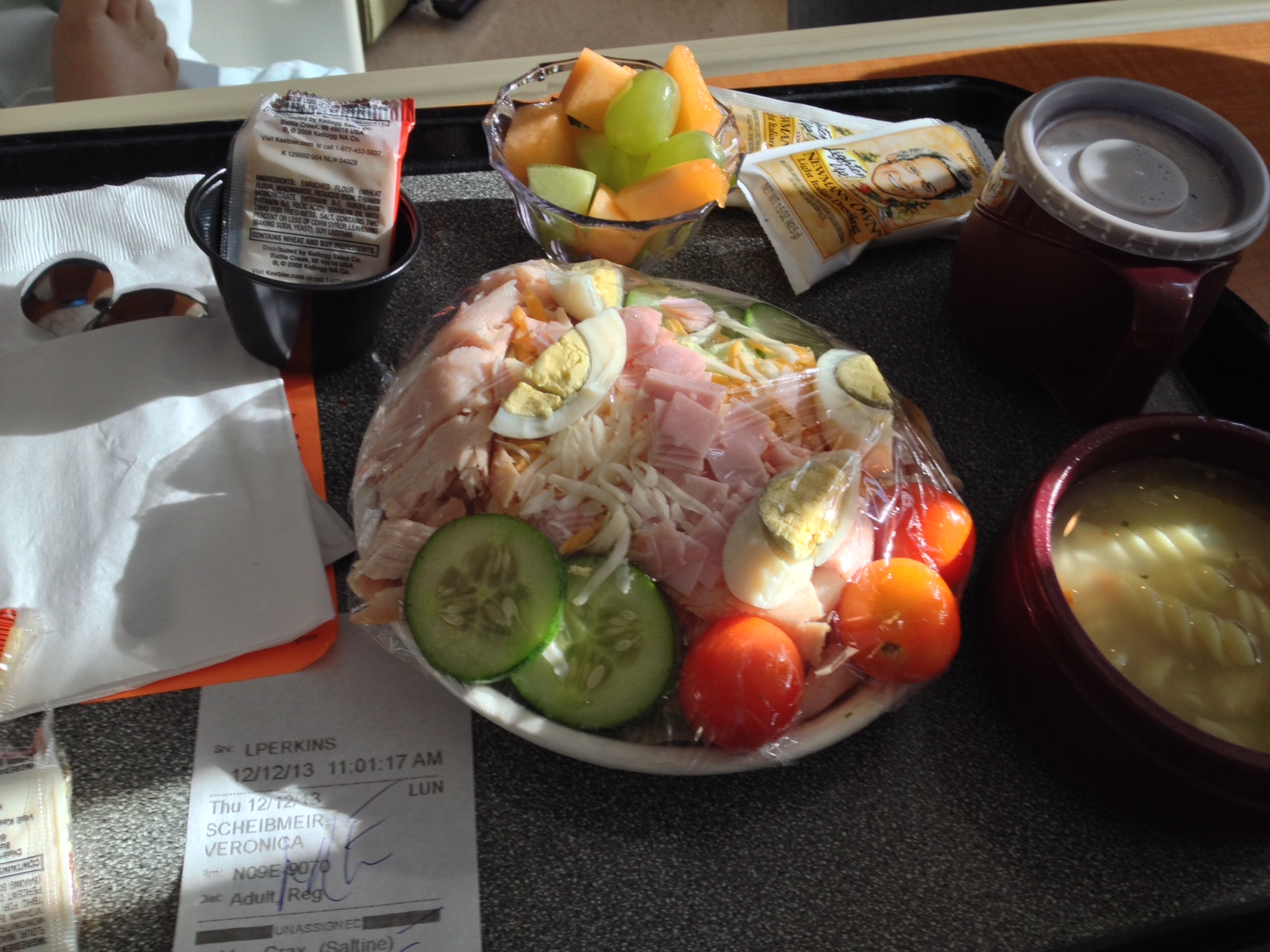 Post-op sonogram? They take you to the older hospital through a tunnel, they don’t have an ultrasound machine in the new one!? The sonographer was fabulous and took her time with me.

Post-Op Pain? I had more discomfort from gas pain and bowels not moving than incision pain. I found colace to do nothing even though I started it several days pre-op. Pericolace didn’t work either.? I drank water round the clock, walked as soon as it was feasible and ate fruit, miserable from the intestinal swelling and pain. When I got home I used milk of magnesia and a glycerin suppository and that finally brought some relief.

Packing? I had brought a small travel pillow with me but it ended up being way too fluffy to do much to help.? I thought a rolled up hand towel in a pillow case would have been great for support and super easy to bring. Don’t worry about bringing much to the hospital.? By the time I was ready to change out of the gown the morning after surgery, it was time to put on comfy clothes to leave in and I totally could have just worn out what I wore in.? So I didn’t use any of my pajamas or robe or even slippers, they provide slipper socks which are easy.? I did use my chapstick and toothbrush.? That’s it!? I waited until the hotel to take a shower.

I didn’t need anything on my incision? no binder or ice pack or pad.? It’s just there with the steri strips and yes, big panties are a must.? The bloating is about the size of 4-5 months pregnant.